Information from that genotype is decoded to a single numerical value or multiple values, which is called a phenotype. That decoding is often done according to commonly known representation of a positive integer as a sequence of bits. These integers are in the range [0, 2l - 1], where l - denotes the length of the bit sequence. In order to represent real numbers, this range should be mapped to a new [Umin, Umax] by a linear mapping. After doing so, the obtained numerical value (phenotype) is used to compute the desired function according to the mathematical formula determining the problem to be solved. Single parameter problems are represented by scalar functions, while more complex multi-parameter problems are described by vector functions. In the first case, a corresponding fitness function is computed from the scalar representation of the system. In the latter, the Pareto approach is often used (to learn more see The Pareto Condition.)

The fitness function is the primary measure of the strength of a chromosome for its occurrence in the next generation. The higher fitness of chromosome the greater chance to reproduce. Reproduction in population is thought as a randomised process based on the fitness function. Only those chromosomes that are selected will take part in creating the next generation. In haploid models, a chromosome pair is a parent pair that exchanges their genetic information in the crossover process, while in diploid models, the process of gametogenesis uses the crossover mechanism to exchange genetic information between gametes. Despite this slight difference between the haploid and diploid models, in both cases it is required to find the crossover point or points (in the multiple crossover models) on the two parent chromosomes with the assumed crossover probability. In addition to this random process, genetic information can be altered through mutations. Mutations are also random processes that occur with a certain probability. Genetic reconfigurations can also be applied to the chromosomes to increase the genetic variability of the newly created population. 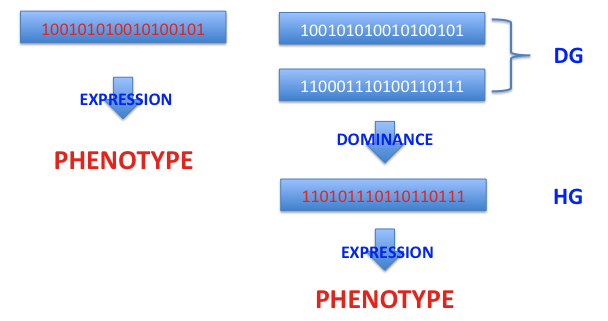 The dominance feature in simple diallelic genotypes can be represented as:

Diploid AG can be extended to triallelic genotypes where the bit of value 1 has two variants, i.e. the weaker type 1 R and the stronger type 1 D . The scheme of domination is presented in the following table

A fitness function is a non-negative criterion of quality computed for each individual chromosome in population. The better the fit the higher value of the fitness function. This feature of a genetic genotype can be used to find the optimal solution (i.e. numeric value) for some mathematical problems such as searching for a function's maximum or minimum. To do this, it is necessary to define the problem to be solved using a f(x) function which is the aim function for the problem under consideration. Let us analyse two issues:

Punishment function H is a penalty added/subtracted to/from the aim function f(x) when any of constraints are violated. Let's deal with two cases:

Scaling the fitness function allows the modification of the survival ability of the chromosome in the population. This is often done for two reasons. The first is to enhance the reproduction of weaker genotypes in the first generations. In this way, populations tend to reach the optimum more slowly and constitute a more flexible genetic population for longer. The second reason is the creation of larger differences between very similar genotypes in the final generations, when the average state of the entire population is very close to the solution sought. This improves the resolution of the method. The following types of fitness function scaling are used:

where xi and xj are phenotypes of i-th and j-th chromosome, respectively. Otherwise, when the computed distance reflects the similarity between two genotypes the Hamming measure is used. It is defined as the number of different bits at corresponding positions on both chromosomes of equal length divided by the length of the first or second genotype. The sharing function S(d) can be set as a linear or a power function of the distance dij between chromosomes i.e.

where the power p is a parameter of the genetic algorithm. The sharing function is computed to modify the fitness function Fi of i-th chromosome in the following way:

where the sum is after j.

Having the entire population built taking into account the fitness factors computed for each chromosome in the population, the group of parents of the next generation can be selected. The mechanism of selection is based on one main rule the better the fitness, the greater the reproduction (more children). Reproduction can be done by one of the following methods:

In each case, selection is done up to complete the new population.

Mutations are applied to each new chromosome with a certain probability. If a mutation occurs the bit value is changed to the opposite value i.e. 1 → 0 and 0 → 1 in diallelic models, while in triallelic ones this change looks like this: 1R → 1D or 1R → 0.

Reconfigurations are applied to chromosomes that have more than one gene. In such cases, the location of the allele (locus) on the chromosome may not be constant. It may vary depending on the reconfiguration used. The following list shows the main types of reconfiguration:

is satisfied where xi and yi are the i-th components of the vectors x and y, respectively. This means that the y point is dominated by the x point. If a point is not dominated by any other point, it is called the non-dominated point. These vectors may represent F fitness vectors F belonging to different chromosomes in the population. Then problem of finding better solutions on the basis of higher value of the scalar fitness function is replaced by a search for a group of chromosomes meeting the above-written condition. The Pareto condition, due to the way it is formulated, can naturally be applied to find the minimum of a function. When the opposite problem is put forward a fitness vector must be multiplied by -1. Then the above-written condition can be used straightforward.
That part of chromosomes that satisfies the Pareto condition must have the same reproductive power because this procedure should not discriminate against any of the non-dominated chromosomes. For this, a specific selection algorithm is used, quite similar to the Wetzel's method mentioned above, but this time the ranking depends on the degree to which the chromosome is not dominated. All not-dominated chromosomes have the same rank value in the selection routine. Having selected the first group of Pareto-positive chromosomes with the rank 1, the next one can be selected in the same manner within a sub-population of Pareto-rejected chromosomes. The group of genotypes has assigned the next rank value i.e. 2, obviously. The lower the rank, the greater the number of children associated with it. This process continues until rank values are found for all chromosomes in the population.

For better results, the multi-parameter Pareto-based problems can be associated with the technique of forming species (e.g. using a sharing function approach).

Genetic algorithms (GA) also play an important role in Genetic Based Machine Learning Systems. One type of these systems is called the Classifier System.

Classifier systems are systems that learn certain rules of conduct in given circumstances. They are built from the following subsystems